The Story behind Golden Years Accessories 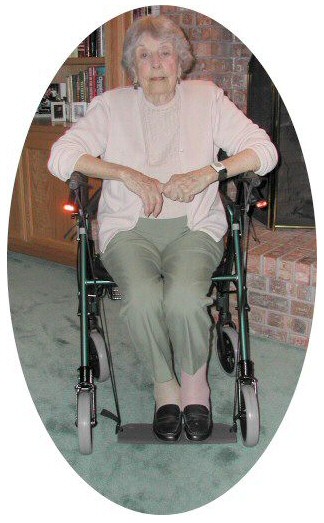 In 2001 my 87 year-old mother moved across the country to a retirement home in Portland, Oregon in order to be closer to me and my family. Although she had used a cane for quite a few years, soon after moving here her doctor recommended a walker to prevent falls and assist in her mobility.

Though my mother was by no means ready for a wheelchair, she frequently sat on her walker as we pushed her around shopping malls, through stores and on walks outside. This capability greatly enhanced the amount of time she could spend with us shopping, taking walks or going downtown with us for dinner.

However, while the walker yielded many benefits, my Mother quickly found that her legs tired easily after having to hold her feet up off the ground while being pushed.

Well my Mother, being the creative person she was (her career was in designing clothes), decided to fix the problem. She designed a sling that attached to the handles of the walker, allowing her to rest her feet and legs while both sitting and being pushed. This was the original prototype for the patented product that exists today

I didn’t think much of the idea at first, which goes to show that even a grown man can still learn from his Mother. As I began to see more elderly people exhibit the same issues, and express the same discomfort with their walkers that my Mother had, and also asking where they could get the footrest, I began to realize this might be a great product to make available to other people who experienced the same issues that my Mother had.